This week local MP Brendan O’Hara will “Brave the Shave” and have all his hair cut off, to raise funds for MacMillian Cancer Care. 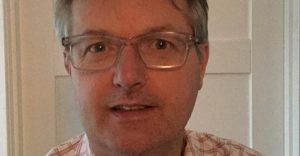 He decided to undergo the radical change of appearance following his brother Diarmid’s diagnosis of lung cancer last month.
Brendan said “In the weeks since his diagnosis, both Diarmid and his wife Yvonne have shown the most incredible courage in refusing to lie down to this disease. Their determination to fight and fight and keep on fighting has been absolutely inspirational.
I wanted to do something positive to support him and when I saw
the ‘Brave the Shave’ campaign I immediately signed up”.

He continued, “There cannot be a family in Argyll & Bute who haven’t been affected in some way by cancer and I felt it was important to show solidarity, not just with my brother but with everyone else currently fighting this awful disease.

I reckon I’ll look pretty awful for a few weeks but it’ll grow back and to be honest, at 53 years old I’m just happy still to have enough hair that I can shave it off”.
Brendan has posted a video of the event on his Facebook Page Brendan O’Hara MP.
There is still time to donate to my appeal by visiting https://bravetheshave.org.uk/shavers/brendan-OHara
Thank you.